“What a Long Strange Trip It’s Been”… to say the least.

I say “This Is Us”, but the “Us” didn’t happen right away. We were “You & I” for an awfully long time before we met… and then for a while still AFTER we met. Well, OK… not THAT long after. Maybe I can explain.

Madeline had been in a long-term marriage once already and I was a Vietnam Veteran with a history of poor judgement in regards to relationships. There’s more information on our individual Facebook pages, so let me just skip ahead to September of 1996. I had just discovered America Online (hey… in 1996 it was cool) and had read the profile of a girl in Southern CA (I was living in Santa Cruz) and I wanted to get to know her. I had sworn off relationships by then… but she was a “safe” 500+ miles away, seemed smart and personable, so what the hell. I summed up all of my courage and let loose with the best that I could come up with…. “43,M,CA – Wanna chat?”  Yeah… it wasn’t the most crowning moment in my life… but in my defense, I was relatively new at being single again, being Clean & Sober, AND at this new “Social Media” thing… but, damned if she didn’t actually answer me and we struck up a conversation. It had begun. Madeline had gotten my attention… and kept it.

By the following February, we had become best friends and were actually thinking of doing business together long distance online. I would go straight from work to my computer… and we chatted online or talked on the phone daily… for hours. I had made up my mind that I wanted to meet in person this girl that could make me smile no matter how bad my day had been. I had a break in my schedule coming up Valentine’s Day weekend and asked her about maybe coming down. She told me she would get the guest room ready and that she had a date that Saturday, but I could hang out with her dog and watch TV if that was OK. I wanted to see my friend… not my girlfriend… and I got my ticket.

She picked me up at LAX and we stopped for dinner at her favorite Chinese Restaurant (where I discovered that people that have been in long term relationships think nothing of reaching across the table to take something that looks good right off of your plate) before renting Brave Heart to watch at her place. Afterwards, I got a good night’s sleep (yes… in the guest room) and was looking forward to coffee on the pier in the morning like she had promised. At coffee, she noticed me checking out the Tilt-O-Whirl ride and asked if I had ever been to Universal Studios. That’s all it took. The little kid in me came out to play… and we spent the entire day laughing and hanging on each other. Oh… and she canceled her date. 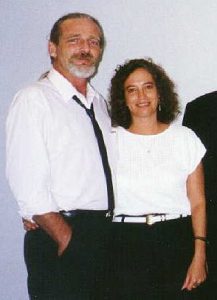 We found ourselves taking turns visiting each other but it didn’t take long to realize that we may as well live together. It was sure going to be a lot cheaper. We began our company Mirage-Net while still some 500 miles apart… but I found myself driving down in a moving truck filled just under half way with MY stuff… filled it the rest of the way with HER stuff… and we moved together to Desert Hot Springs (near Palm Springs) in the So.CA desert and set out to develop an idea that it would be possible to build an online community of people in business sharing with and supporting one another. We called our idea “MAX In Common”… and it worked well for a lot of folks for several years before closing. More than anything, it helped develop my skills in PHP programing as well as database & website development. Madeline had given me the handle “The Webmonster” (a play on “Webmaster”)… it seemed to accurately portray my attitude… and it stuck. So… we had become “Mad & the Monster”. Truth in advertising?

We were together 16 years (4 years in Mena, AR) when my VA Disability was bumped to 100% and it was silly to not get married and get her under VA Health Care. Didn’t seem like either of us had better plans anyway. During our time together, my life became more than I ever expected it to. She came to love my son Dillon and helped me raise him the best we could do part-time. She was a big part of my re-connecting with my family… and they took her in like she had always been there.  It was pretty much a no-brainer. I married my best friend in November of 2013.

We’ve shared laughter and tears… dreams and fears… and still… here we are. Long story short… we’re still best friends even with all of the “life” stuff that we’ve been through. This site is an attempt to give you a BIT more insight. “This Is Us”…. but, if you want to know more… get to know us. We’ll be happy to fill you in.